NEW PHASES OF COOPERATION BETWEEN TURKMENISTAN AND UNESCO WERE DISCUSSED

On January 13, 2020, the Deputy Chairman of the Cabinet of Ministers, Minister of Foreign Affairs of Turkmenistan R.Meredov met with the Officer-in-Charge of UNESCO Tehran Cluster Office Cvetan Cvetkovski. During the meeting, the parties stated the high level of cooperation between Turkmenistan and the United Nations’ Educational, Scientific and Cultural Organization (UNESCO).  In this regard, the adherence of Turkmenistan to protection of the national and worldwide values, promotion of the d... 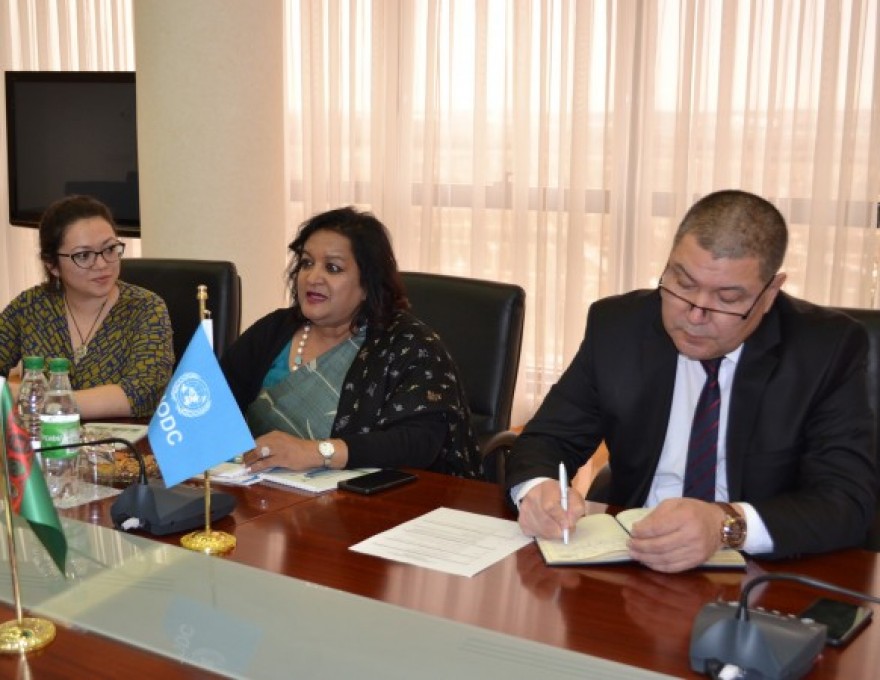 On January 13, 2020, the meeting of the Deputy Minister of Foreign Affairs of Turkmenistan with the Regional Representative for Central Asia of the United Nations Office on Drugs and Crime (UNODC) Ms. Ashita Mittal was held in the Ministry of Foreign Affairs of Turkmenistan. At the beginning of the meeting, the Turkmen side thanked the UNODC Regional Representative for accepting an invitation to participate in the International conference “Turkmenistan and International Organizations: Coopera...

On January 11, 2020, the President of Turkmenistan Gurbanguly Berdimuhamedov expressed deep condolences following the death of the Sultan of Oman Qaboos Bin Said.

President of Turkmenistan Gurbanguly Berdimuhamedov expressed condolences to the President of Islamic Republic of Iran Hassan Rouhani in connection with the accident of the passenger aircraft of the “Ukraine International Airlines” airlines near the city of Tehran and the death of numerous Iranian citizens in this plane crash.

MEETING WITH THE NEWLY APPOINTED AMBASSADOR OF IRAN IN TURKMENISTAN

On the 9th of January 2020, the Minister of Foreign Affairs of Turkmenistan met with the newly appointed Ambassador Extraordinary and Plenipotentiary of the Islamic Republic of Iran to Turkmenistan Gholam Abbas Arbab Khales. After presenting the copies of his credentials, Ambassador Gholam Abbas Arbab Khales expressed gratitude to the Turkmen side for the congratulations upon his appointment to the high diplomatic post and voiced his hopes for further strengthening of bilateral ties between T...

MEETING WITH THE AMBASSADOR OF ISRAEL IN THE MFA OF TURKMENISTAN

Today, on the 9th of January 2020, the Minister of Foreign Affairs of Turkmenistan received the Ambassador Extraordinary and Plenipotentiary of the State of Israel to Turkmenistan Moshi Kamhi whose diplomatic mission in our country has completed.  On behalf of the Government of Turkmenistan, the Head of the external policy agency of our country expressed gratitude to the Ambassador of Israel for effective work during his mission and vast input into strengthening of Turkmen-Israeli cooperation...

On the 8th of January 2020, the President of Turkmenistan Gurbanguly Berdimuhamedov expressed condolences to the President of Ukraine Vladimir Zelenskiy in connection with the accident of the passenger aircraft of the “MAU” airlines near the city of Tehran which brought to numerous victims.